A lady likes to pee standing up –

After reading Cunt, I want to take more charge of my bodily fluids – change my relationship to my cycle.  She, Inga Muscio, writes of inducing her own abortion using herbs and her mind.  She writes of using moon charts.  She also highlights spending money on women’s products created by women and owned by women.  The fight for true equality has to happen in the economic arena, too, she argues.  Hence, I started my investigation with Lunapads.  Lundapads makes reusable menstruation products.  Most of the materials are eco-friendly which means they’re probably safe for our lady parts and for those with chemical sensitivities and/or sensitive skin.  They even have blankets specifically created for wiping up  after periods and blankets to protect your sheets because believe you me, I am tired of worrying about blood stains or buying three different boxes of feminine napkins to suit my flow needs.  There’s even a video where the creator provides instructions on how to make your own fabric menstrual pad.

One particular product really stuck out.  The diva cup. 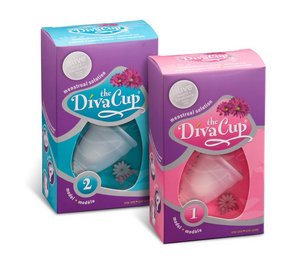 The diva cup (Or the Moon Cup if you want to support a competitor) is a silicon cup you insert into your vagina.  When it’s full you pour it out, clean it, and pop it back in.  With the diva cup you can recover the blood and pour it on your plants!  If the blood is nutritious enough to facilitate an environment to grow a human, then it is certainly more than good enough for our plants.  Additionally, the cup is cleaner and more comfortable.  Not to mention, all the savings, from relinquishing the use of disposable tampons and pads makes the diva cup priceless.  In this same vein, the author mentioned using sea sponges which would work more or less the same way as the diva cup but I cannot seem to find much information about menstrual sponges.  What I have found is negative and often cites bacteria problems with the sponge.  Gross.

Since we’re on the topic of vaginas, I was reading Bust’s blog and there was a post about a scientist inventing a female condom with teeth (Vagina Dentata, anyone?).  She invented the device out of frustration, desperation, and need because South Africa has one of the highest rates of rape in the world.  Additionally, HIV/AIDS rates are some of the highest in the world in South Africa. Turns out the condom can only be removed from a man’s penis by a doctor.  If he pulls on it, the teeth grasp tighter; Nor is he able to pee while wearing this condom.  So, it is imperative he see a doctor which will give the hospital staff a chance to alert police and make a report.   I think it’s a fabulous device.  It’s empowering to know there is a way to protect yourself.  However, there is controversy.  First, What keeps a man from pulling it out before raping?  Secondly, the violence could escalate into death when he realizes his error.  In my opinion, violence is violence, there is always a chance that rape could end in death; the purpose being to eliminate complaining victims and witnesses.  Personally, I would rather have the condom than not.  More importantly, women should have the choice to protect themselves in that manner if they desire it.

Well, while we’re on the topic of choice regarding our lady parts, I plan on attending music festival or two.  I plan on avoiding the public bathrooms, which will inevitably be disgusting. To get around this, I thought I could bring some magic cones.  While I was interning at Bust way back in late 2007 and early 2008, I heard about the disposable urinary device.  It’s pretty much a funnel.  What’s great about is it enables a woman to discreetly relieve herself without exposing herself to dirty germs or popping a squat.  I was reading a few articles and observing comments about the products and women were disgusted.  They included the product in a list of ‘ten worst items ever manufactured for women.’  They wanted to know why women could not continue to squat.  Those comments are inconsiderate and unimaginative.   One, not everyone has a great stream or the ability to force it out in a straight way.  Two, not everyone can squat.  Three, what does a woman do when she’s wearing pants?  She can remain covered while she’s using a magic cone or go girl! And, lastly why do women care if someone cannot squat, what do they expect a woman to do?

There are many brands: Urinelle, the Go Girl!, the Magic Cone, WhizBiz, p-mate, pstyle, and Urifemme are some of the products I found when I typed in “female urination device.”  Personally, the p style is the most attractive option, but the magic cone probably makes the most sense being disposable and all.

Of course, there’s the stupid joke about God offering man and woman a gift after creating the universe.  He offers the ability to pee standing up or- Man cuts him off before he hears his second option and chooses that.  God resumes, then, says brains was the other gift and gave that to woman.  Ha.